Racked to Tertiary today, may have aerated it a bit too much. Back when I transferred to secondary I put about an additional 8# of raspberries into the mead. It wasn’t until after that I read that was a bit heavy, I should have just stuck to the suggestions in Schramm’s guide. I’m going to wait to add the chipotle and I might even nix the whole idea and see how it is when the Tertiary clears up. With all the additions I’ve lost track of what the ABV will be, but I suspect it’s around 12%. I did taste it today and I enjoy it, even though I can’t really pick up the honey.

In other news, I started a sweet show mead that’s still going and really tasting quite good. Just used raisens. I took my notes on a sticky note. I’ll transcribe it soon enough to share the recipe with everyone here. I got a berry honey from a local apiary and wanted a mead to showcase that honey. I’m super excited to see how it is when the fermentation is complete.

I recrystallized the honey using a water bath, boiled the Raspberry puree to be sure I didn’t contaminate anything and I also boiled the craisens. I topped off with water from my fridge filter, talk about a major hassle. And I added Ice to bring town temps and pitched yeast.

My choice to add fruit in primary was based upon something I heard about it adding complexity to the final product. I do plan on adding raspberries in secondary to reinforce the flavor.

Let me just tell you that the CO2 burps from the airlock were absolutely DIVINE! Like best smell in the world.

I plan on transferring into secondary on top of 3-6lbs of frozen local raspberries. I’m up in the air on type of pepper even though I’ve declared this a chipotle mead. I know I want some heat and I know I want some smokeyness and have recently read that chipotle peppers bring way more smoke than heat. I don’t want to drown out the honey or raspberries like I did with the oak on my last batch of mead. 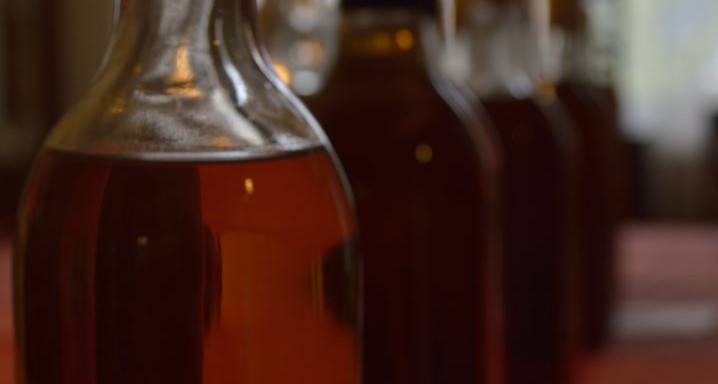 What started in April 2012 as an interesting side experiment has turned into a crazy hobby that I would love to turn into a lifestyle one day. From left to right we have:

2) Spiced Apple Cherry Cyser, A dry apple mead with a dash of cherries.

I’ve had an inkling of an idea to do a maple mead for quite a while now. I bit the bullet when one of my co-workers had family back east that harvested their own maple syrup offered to get a gallon for me at a discount. I got around to brewing on May 11th, 2014. The recipe is below.

I begun brew day by re-liquifying my honey using a hot water bath as it had crystallized and I didn’t think it would ferment as fast in it’s crystallized state. I took multiple gravity readings after adding all the ingredients together and it didn’t make much sense.

My hydrometer setup isn’t the most kosher however which can lead to inaccurate readings. I have a thin piece of string attacked to the top end so I can drop it in my carboy.

During the whole brewing process I would pick up my carboy and agitate it daily for the first week and then I moved to a weekly basis before racking to secondary. I also staggered my nutrients but unfortunately I did not keep track of when or how much.

Added second half of Maple Syrup.

Note: In retrospect, I would have waited till the honey and the first half of the maple syrup finished fermenting before adding the second half.

Potential Problem: Temperatures were in the 70s for the 1st week of fermentation. I had the fermentation vessel in a closet but I am pretty sure the temperature range traveled outside of the D47 yeast’s preferred temperatures.